To share your memory on the wall of Gary Dudek, sign in using one of the following options:

Print
Gary James Dudek, 60, of Chelmsford, MA, passed away peacefully at home on January 30, surrounded by his heartbroken family after a six-year battle with melanoma most people never knew he had.

The ultimate family man best described by th... Read More
Gary James Dudek, 60, of Chelmsford, MA, passed away peacefully at home on January 30, surrounded by his heartbroken family after a six-year battle with melanoma most people never knew he had.

The ultimate family man best described by things he did for others, he is survived by his beloved wife Maureen; his four children, Paul and Melissa of Dedham, MA, Leigh Ann and Ian O’Connor of Stoneham, MA , John of Boston, MA , William of Chelmsford, MA ; four siblings, Lee and Donna Dudek of Middleboro, MA , Walter and JoAnn Dudek, of Anthem AZ, Brian and Beth Dudek of Hingham, MA Lisa and James Vickers of San Diego, CA, 14 nieces and nephews and many relatives who adored him.

Gary was predeceased by his parents Leon and Mary Dudek and his in-laws Walter and Kathleen Harrington.
Gary was born on December 30, 1960 and spent his childhood in an idyllic, close knit neighborhood in East Braintree, MA across the street from Watson Park, where kids of every age played ball and swam all day, asked for quarters to get treats from the ice cream truck and came home when the streetlights came on. He was the younger, silly sibling who danced for the camera, pranked his sister on a regular basis, and was the one most scolded for causing others to dribble milk at the dinner table. As he grew older, he loved to tell jokes, spread joy with his full smile and infectious laugh, and spoke with a rich, mellow voice that often had others asking if he worked in radio.

After graduating from Archbishop Williams High School where he played football and ran track, he studied forestry at the University of Maine and took a job in lumber sales that flourished into a near 40- year career, most recently with Koppers Utility and Industrial Products of Pittsburgh, PA. Gary loved his job and work family and forged hundreds of friendships with colleagues and customers alike. He set the bar high as a consummate, reliable and well-respected leader throughout the Northeast.

He married his college sweetheart Maureen in 1986. He possessed everything she was looking for in a partner and he put her on a pedestal and never took her down. They shared a love that few attained and he showered her with anything she wanted…including lots of kids, dogs and cats (both naughty and nice) and a 120-year-old farmhouse that he knew would always be a work in progress. They finished each other’s sentences and held each other’s hearts and they were months away from celebrating their 35th wedding anniversary.

A family man through and through, he dedicated his life to his children and considered their life partners as his own. Their love for him was immeasurable. His siblings also held a special place in his heart and he loved reconnecting with them at celebrations and weekly phone calls filled with both ‘I love you s’ and meaningless banter.

Gary valued the life lessons learned through sports and coached baseball and ice hockey teams in Chelmsford for years. Paul, John and Will were doubly blessed to have their father on the bench, instilling in them the value of hard work, perseverance and remembering to keep sports fun. An avid runner who completed three marathons and multiple half marathons, Gary often reiterated his number one strategy to Leigh Ann as she embarked on her own 26-mile endeavors: Just take off the watch and enjoy the run.

He loved house projects and yardwork. He power- washed the universe. He took on life’s mundane tasks and turned them into challenges, whether the dishwasher needed “re-organizing” or trying to best the week’s grocery shopping in under 15 minutes, routinely posting results on the refrigerator door.

Gary made the most of every day but there was also nothing quite like hanging out with Will and watching a day full of college football over a bowl of Kraft macaroni and cheese for lunch. He also loved lounging by the pool with family and friends, with a perfectly iced cooler, Dire Straits on the sound bar, and a well-deserved vodka tonic in his hand. He loved taking family vacations to Maine and Martha’s Vineyard and cross-country adventures across the open road, just as long as he wasn’t 30,000 feet up in the air. With the car packed with precision and checklists complete, every journey started the same way as the car rolled down the driveway... “Jiggita-Jiggita…and away we go!”

He shared his cancer diagnosis with very few and most never knew of his struggles until they became insurmountable. He marched on with remarkable courage until the end and remained incredibly grateful to those trying to save him, most notably Dr. Ryan Sullivan and his talented team at Massachusetts General Hospital.

Visiting hours will the held at Blake Chelmsford Funeral Home, 24 Worthen St. Chelmsford, on Sunday Feb. 7 from 12-3 pm. Due to COVID-19 restrictions, the funeral is private. You are kindly invited to view Gary’s Mass of Christian Burial live on Monday, Feb. 8, 2021 at 11:00 am. Please visit https://chelmsfordcatholic.org/watch-via-livestream at the time of the service.
In lieu of flowers, donations in Gary’s name can be made to Massachusetts General Hospital Center for Melanoma, 55 Fruit St. Boston, Mass. 02114. https://giving.massgeneral.org/cancer/donate/
Read Less

Receive notifications about information and event scheduling for Gary

Print
Due to gathering limitations, Funeral Service and Interment will be held privately. You are invited to view Gary's Mass of Christian Burial live on Monday, February 8, at 11:00 am. Please visit the live link above in the obituary at the time of the service.

We encourage you to share your most beloved memories of Gary here, so that the family and other loved ones can always see it. You can upload cherished photographs, or share your favorite stories, and can even comment on those shared by others.

Posted Feb 05, 2021 at 10:33pm
Remembering you cousin Gary Dudek in our minds and hearts forever. Love and Prayers always, 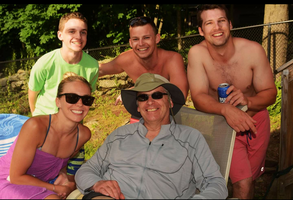