To share your memory on the wall of William Greenwood, sign in using one of the following options:

Print
William R. “Bob” Greenwood, a lifelong resident of Chelmsford and Navy veteran, went to be with our Lord on Saturday, June 5, 2021 at the age of 95.

Bob was born on June 13, 1925 and was the son of the late Raymond and Katherine (Sh... Read More
William R. “Bob” Greenwood, a lifelong resident of Chelmsford and Navy veteran, went to be with our Lord on Saturday, June 5, 2021 at the age of 95.

Bob was born on June 13, 1925 and was the son of the late Raymond and Katherine (Shore) Greenwood. He was predeceased by his wife Joan (Kelly) Greenwood who passed away in 2013. Bob was a Navy veteran who proudly served his country in World War II and the Korean War. He was a local businessman and served the town in several capacities including the Board of Health and Conservation Commission.

He is survived by his sons; Gary and his wife Cynthia of Granbury, TX; Roger and his wife Stephanie of Harpswell, ME; his daughter Linda of Burlington, his grandsons; Bennett and his wife Alex of Watertown, William and his wife Lisa of Ashland, his great grandchildren; Lucy and Miles, his brother Ronald Greenwood and his wife Anne Marie and his sister Nancy Butler. He was predeceased by his siblings; Raymond, Russell, Eileen Fletcher, and Connie Pickard.

A Mass of Christian Burial will be held on Thursday at 11am at St. Mary Parish, 25 North Rd., CHELMSFORD. KINDLY MEET AT THE CHURCH. Interment will follow at Pine Ridge Cemetery, 130 Billerica Rd., CHELMSFORD. In lieu of flowers donations may be made in Bob’s name to Chelmsford Little League, P.O Box 62, Chelmsford, MA 01824. Funeral Director Paul A. Hardy, Jr.
Read Less

Posted Jun 10, 2021 at 02:23pm
Bob was truly one of those people who made Chelmsford, "Chelmsford". He touched the lives of so many people in so many ways, that its hard to remember everything he did for so many of us. His guidance and help while he served on the Conservation Commission helped us to finally create our beautiful Veterans Memorial Park on North Rd.....with the brook running through it. As a "Blow-In" from Lowell, he taught me what a Septic System was all about... how to install it right...and how to keep it working properly. Invaluable info for a "City Boy". As a Veteran myself, I know his service to our Country in the Navy certainly inspired the next generation to follow in his footsteps....."Let the Children Guard what the Sires have Won". Bob Greenwood was a Winner; he's a man I'll never forget, nor will my wife and children. I know that many, many people feel the same way. Our Condolences to his family and friends. Thank you for sharing him with us. May his Memory be as a Blessing and endure forever. 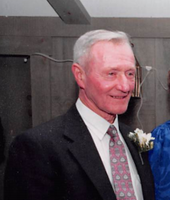