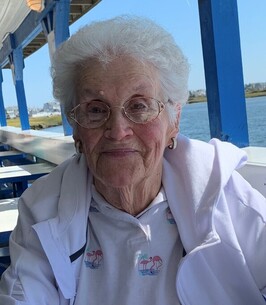 Mary Jane (Merrill) Sevigny, age 88, a longtime resident of Lowell, passed away at the Palm Center in Chelmsford on Friday, March 25, 2022 surrounded by her loving family. She was the beloved wife of the late Ronald Joseph Sevigny with whom she enjoyed over 40 years of marriage.

Known as “Jane”, she was born in Lawrence on November 25, 1933 and attended Lawrence High School. After having six children, she worked for many years as a housekeeper at Fairview Nursing Home then Solomon Mental Health Center. She then worked retail and in her later years as an activities’ assistant at Heritage Nursing Home.

She loved to travel and enjoyed the beach and dining at Markey’s, playing bingo and cards at Dracut Senior Center with her close friends Lorraine and Ray Lowe, and going to Foxwoods. She especially loved being with her family and many grandchildren and great grandchildren. Over the years she became an avid fan of the Patriots and Red Sox.

Visiting hours will be held on Friday, April 8th from 5pm to 7pm at the BlakeFuneral Home, 24 Worthen St., Chelmsford. Her Funeral Service will be held on Saturday at 11am at St. Joseph Cemetery Chapel, 96 Riverneck Rd., Chelmsford. Kindly meet at the chapel. Interment will be held privately. In lieu of flowers, memorial contributions may be made in Mary Jane Sevigny’s name to the Ukrainian branch of UNICEF – currently focused on providing humanitarian aid.