To share your memory on the wall of John Howard Paasch, sign in using one of the following options:

John was born in Buffalo, New York on October 26th 1944 to Albertha (Grimm) and Howard John Paasch.
John grew up and went to school in Buffalo... Read More
John Howard Paasch a long time resident of Chelmsford passed away on January 24, 2021.

John was born in Buffalo, New York on October 26th 1944 to Albertha (Grimm) and Howard John Paasch.
John grew up and went to school in Buffalo and Grand Island, New York, graduating from Tonawanda High school. He continued his education at the University of Buffalo receiving his Bachelors Degree in Electrical Engineering in 1967. In 1967 John moved to Massachusetts to start his career as an Electrical Engineer with Raytheon Company in Bedford, MA. While working for Raytheon John graduated from Northeastern University with a Masters degree in Electrical Engineering. He also worked at the Raytheon facility in Andover, Tewksbury, Wayland and Sudbury Massachusetts. Throughout John’s thirty-seven year career working for Raytheon on the Sparrow and Hawk Missile Systems as an Integration Engineer he would travel to Point Magu and China Lake California, White Sands Missile Range in New Mexico, Huntsville, Alabama, Germany and Crete, Greece.

John was diagnosed with Waldenstrom’s Microglobulinemia a rare form of lymphoma in 2004 and retired one year later. During the past sixteen and a half years he has been active in helping other people with his disease through his participation with the International Waldentroms’s Macroglobulinemia Foundation (IWMF). He would travel to area hospitals distributing informative materials for the IWMF as well as working at their yearly conference.

John enjoyed taking care of his fish pond and a little gardening. He also enjoyed exploring the coastal and country roads of New England in his VW convertible always with a stop to explore a new or familiar town, a new or familiar restaurant, farm stand, orchards for picking apples and peaches, or a picnic by the water. He also enjoyed entertaining his family and friends and was a very kind, and generous husband, brother, brother in law, and friend. We all will miss him.

Anyone interested in making donations may do so to: International Waldenstrom’s Macroglobulinemia Foundation (IWMF), 6144 Clark Center Avenue, Sarasota, FL 34238 or The Leukemia & Lymphoma Society (LLS), PO. 12268 Newport New, VA 23612. Visiting hours will be held on Thursday, from 5:00 – 7:00 pm in the Blake Chelmsford Funeral Home, 24 Worthen St., Chelmsford. Due to gathering limitations, his funeral service and interment will be held privately by family invitation only.

Receive notifications about information and event scheduling for John Howard

Print
Due to gathering limitations, his funeral service and interment will be held by privately by family invitation only.

We encourage you to share your most beloved memories of John Howard here, so that the family and other loved ones can always see it. You can upload cherished photographs, or share your favorite stories, and can even comment on those shared by others.

Posted Jan 28, 2021 at 06:50pm
So sad to hear of John's passing. I always enjoyed talking with him. He was a good sport and did a lovely video interview for me to share with my students. He helped educate them about WM.

So sorry for your loss.

Posted Jan 27, 2021 at 08:48am
Please accept our heartfelt sympathies for your loss. John was of great help to many people over the years , including me. John, with his sharp "rocket scientist" mind, was always ready to assist with a chart or graph to assess a fellow Waldenstrom's macroglobulinemia patient's disease status or treatment response. He was the embodiment of selflessness - always pursuing better treatments for fellow WM patients, and championing causes on behalf of the IWMF.

Personally, I appreciated his advice and suggestions over the years regarding my own disease status, I enjoyed our many phone calls, and will miss him dearly.

I will raise a couple of glasses of wine in his honor this evening...a bit saddened...but joyful too for having had the pleasure to have known him and met with him in person a few times over the years.

As John would sometimes say at the end of his emails to fellow WM patients, "may you all be well on your WM journey" - I extend the same wish to John now as he embarks on his next journey. And I offer my deepest condolences to his wife Penelope and his family - may they find comfort in their memories of good times spent with him over the years.
Comment Share
Share via:
CA

Posted Jan 25, 2021 at 09:17pm
John, you will be so missed as you had one of the sweetest hearts and the most beautiful soul. Our chats, and your embracing hugs were so special to me, as we only saw each other on Special occasions and vacations.
You wil be missed dearly, rest in peace my dear Brother.In.Law.
Love,
Carolyn D. Abraham
Comment Share
Share via:
BS

Posted Jan 25, 2021 at 07:30pm
Thank You John for the many, many happy memories and your endless brilliant humor. You will be missed dearly!
Love You!
Bruce & Ann Marie
Comment Share
Share via: 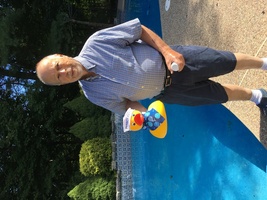 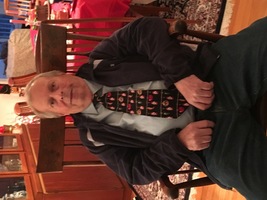