To share your memory on the wall of Evelyn Newman, sign in using one of the following options:

Print
Evelyn L. (McNulty) Newman, a longtime Chelmsford resident, passed away peacefully on Sunday, June 6, 2021 at her home. She was the beloved wife of the late Francis J. Newman, Jr.

She was born in Boston, MA, on August 19, 1927, and wa... Read More
Evelyn L. (McNulty) Newman, a longtime Chelmsford resident, passed away peacefully on Sunday, June 6, 2021 at her home. She was the beloved wife of the late Francis J. Newman, Jr.

She grew up in West Roxbury and Dorchester but spending summers at Gregg Lake in Antrim, NH. Her first job was as a legal secretary at Casey & Casey and then later at the Department of Justice in Washington, DC while married to her first husband, Robert Lee. When she moved back to the South Shore she worked at the Old Mr Boston Distillery.

In 1965, when she married Frank, they moved to Chelmsford, MA. She became involved with the Cultural Society board and the Chelmsford Art Society, even winning several awards for her oil paintings at the 4th of July Art Show over the years. She was also an avid reader of crime and mystery novels and could be seen frequenting the town libraries in the area looking for the next thing to read. Her family would enjoy several weeks each summer at the family cottage in Manomet.

She took a secretary position with the Recreation Commission giving her the ability to promote more arts and theater in town. She also worked for the Board of Selectman for several years prior to joining the Sewer Department for the initial undertaking of adding sewer and water to the town. She retired at 72.

In her retirement she was able to travel and take cruises and frequent Cushing, ME to visit her good friend Peter Karonis. Likely her most interesting journey was the fjords of Norway crossing into the Arctic Circle experiencing the tradition of having ice poured down your back.

She was a fan of jazz music and of Frank Sinatra, Tony Bennet, Billie Holiday and even Sting. She was an avid groupie of her son’s band ironically named The Motherless Children often making them late night subs after gigs.

If a person or animal needed help or a place to stay, she was there for them.

Evelyn leaves her children; Christina McCartney and her husband Doug McCartney of New Fairfield, CT, Eric Newman and his wife Tracy of Chelmsford, MA, her adored granddaughters, Rachel, Rebecca, Zoe, and Phoebe. She is predeceased by her sisters Polly Hurley and Jean Clark. She leaves behind many nieces and nephews who will remember her fondly.

Visiting Hours will be held on Sunday, June 13, 2021 from 2:00 – 4:00 pm in the Blake Chelmsford Funeral Home, 24 Worthen St., Chelmsford. Her graveside services will be held privately. Memorial donations may be made in her name to The Home for Little Wanders or Buddy Dog Humane Society.
Read Less

Receive notifications about information and event scheduling for Evelyn

We encourage you to share your most beloved memories of Evelyn here, so that the family and other loved ones can always see it. You can upload cherished photographs, or share your favorite stories, and can even comment on those shared by others.

3 trees were planted in the memory of Evelyn Newman

Posted Jun 11, 2021 at 03:23pm
We are thinking of you and love this memorial tree idea. Our heartfelt condolences on your loss. 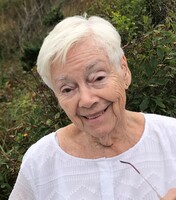