To share your memory on the wall of Charles Jodry, sign in using one of the following options:

He was born in Hamilton, Ohio, on March 20, 1936, and was a son of the late Garnet Jodry and the late Sylvia (Rhoten), Kimberly.

Larry grew up in Mowrystown, Ohio, and was a young boy of eight when his father, a United States Marine, was killed in Iwo Jima, Japan. His mother later remarried Russell Kimberly, and the family moved to Kettering, Ohio, where Larry attended Fairmont High School. Larry had a passion for riding and working on Whizzer Pacemaker motorbikes with friends. He attended Sinclair Community College, where he received his Associate's Degree and played basketball for the college team. Larry married Ruth Anne in 1957, and they lived in Springboro, Ohio, until 1962 when they relocated to Massachusetts.

Having worked for several companies as an Engineer including GE, Avco and Itek, Larry landed at the Raytheon Corporation, where he remained for 27 years before retiring in 1999. While working at Raytheon, Larry went to night school for ten years to obtain his Bachelor of Science Degree from Northeastern University in Engineering. He loved basketball and coached youth teams and played in several “over 30” Chelmsford Church league tournaments.

Larry was a very active member of the Society of Allied Weight Engineers (SAWE), where he attained the executive membership levels of Executive Vice President and Fellow.

Most of all, Larry enjoyed spending time with his son Greg and his family, sharing the holidays and meeting every weekend to watch basketball, football and enjoy a meal together.

Larry leaves his son, Charles G. “Greg” Jodry and his wife, Christine, and their three sons Zack, Troy, and Kyle; his son Geoff’s son Dylan Jodry; his sister Barbara Cohen; half-sisters Terry Greenwald and Diana Ross; his half-brothers Roger Kimberly and Kirk Kimberly; and his very good friend Ava Benson. He also leaves behind many more family members and dear friends. Sadly, in addition to his wife, he was predeceased by his son Maurice G. “Geoffrey” Jodry and his half-brother Kent Kimberly.

A celebration of life will take place at a later time when Covid restrictions allow.
Read Less

Print
A celebration of life will take place at a later time when Covid restrictions allow.

Posted Jan 15, 2021 at 10:51am
Greg and Christine,
Please accept or deepest sympathy in the tragic loss of Larry. It was extremely sad to hear of Larry’s passing, he will be missed!
Larry was a great coworker who was excellent at his job at Raytheon. He was very conscientious at his work, he performed to a high standard and was very active in SAWE.
As you are aware, Larry and I became personal friends, both during and after, our time at Raytheon. You will recall the many NASCAR events we all attended and the numerous Fight events we watched.
Larry was wonderful to be around and always had a positive aspect to life. We were glad to have known him and his family.
With Respect,
Bob and Ginny Lailer

Posted Jan 11, 2021 at 06:46am
My sincere condolences to the entire Jodry family on the loss of your loved one. I met Larry through my mom, Vicki Salinas, who worked with Larry at Raytheon. I was lucky enough to get to know Larry & his wife more personally when I was invited to the lunches they'd occasionally have with my mom on the weekends. My ex-husband also had bought Larry's old Dodge Dart years ago! I'll always remember him for his kindness & humor! I hope that loving memories see you through this difficult time. My thoughts and prayers are with you all.
Comment Share
Share via: 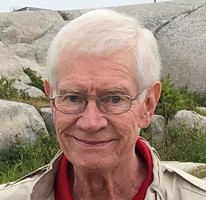