To share your memory on the wall of Charles Hoefler, sign in using one of the following options:

At a USO dance while stationed at Fort Devens, he met his future wife, Dorothy E. Sjobohm. They married and started a new life in Chelmsford, MA. Charlie worked as a teller and eventually as a branch manager at the Lexington Trust Company/Shawmut Bank in Bedford, MA. Following his retirement, his love of books and old movies led him to a part time job working for Barnes and Nobel in Nashua, NH, where he could share his passion and expertise with like minded people.

Charlie was an entertainer, a singer, a storyteller, an impersonator - who put smiles on countless faces. The world is a little less funny without him.

A private memorial service will be held for family members.
Read Less

Print
A private memorial service will be held for family members.

Plant a Tree in Memory of Charles
Plant a tree 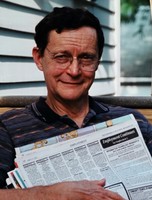