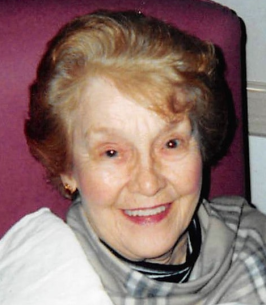 Born on February 10, 1924 in St. John’s, Newfoundland, Canada, Bernadette was the daughter of the late Llewellyn and Mary (Banfield) Walker.

Bernadette worked at Westlands School in Chelmsford for a number of years and also at Houghton Mifflin Book Publishers in Boston.

Bernadette was the wife of a hard working carpenter, a mother of two bright and beloved sons, and a mother in law and friend to a devoted daughter in law.

She was also a proud and involved grandmother and great grandmother. Bernadette was the kind of grandmother who was happy to play Hopscotch one minute and hold a Tea Party (using "Bone China" teacups) the next. She enjoyed sewing and knitting and lovingly made one of a kind afghans and "dolly clothes" for her granddaughters.

Her thoughts were always on her family whether near or far and she always held a special spot in her heart for her beloved Newfoundland. Shortly before she passed, Bernadette told her granddaughters and great granddaughters that she thought about Newfoundland "all the time" and that she "wanted to get back there." Her loved ones believe that, with her passing, she's done just that. She got "back there" and she has gone "home."

Bernadette leaves behind her grandchildren; Kelly Ann Vokey and husband Leo Carr; Tracy Ellen Vokey and her husband Mark Brophy; Stephanie Ann Vokey; Cynthia Irene Vokey; and her great-granddaughters Hannah Elizabeth Carr and Emma Rose Carr. She also leaves behind many cherished nieces and nephews who will always lovingly refer to her as "Aunt Bun".

Funeral services and interment will be held privately. Memorial donations may be made in Bernadette’s memory to the Chelmsford Public Library.